AGGREGATE
Gravel, shingle or pebbles etc used in the manufacture of concrete.

APRON
A metal strip, usually of lead, fitted at the base of a chimney or under window sills above tile-hung bays, to provide a waterproof joint.

ARCHITRAVE
Moulded wood strip covering the joint at the edge of a door or window frame and the surrounding wall.

ASBESTOS CEMENT
Cement with 10 –15% asbestos fibre as reinforcement. Hazardous fibres may be released if cut or drilled.

BACK GUTTER
A metal flashing strip forming a waterproof seal between the back of a stack and its roof slope.

BALANCED FLUE
Metal vent that allows gas appliances both to draw air in from outside and to expel exhaust fumes. Some are fan assisted.

BALUSTERS
Vertical spindles supporting the handrail of a staircase.

BALUSTRADE
A row of balusters / spindles joined to a horizontal rail, typically to a staircase or landing.

BARGE BOARD
Boards placed along the verges of a roof , usually at gable ends, often of decorative timber.
AKA ‘vergeboard’.

BATTEN
Thin lengths of timber to which tiles or slates are nailed or fixed.

BENCHING
Smooth layer of concrete alongside the drainage channel in an inspection chamber. AKA ‘haunching’.

BOND
The pattern in which bricks are laid in mortar to form a wall.

BUTTRESS
A brick or stone support to a wall designed to resist thrust movement and to give added stability.

CASEMENT
A window hinged at one edge and designed to open inwards or outwards.

CAVITY WALL
Standard modern (post 1930) main wall construction comprising two leaves of brick or blockwork about 280mm thick, separated by a gap (cavity) of about 50mm which can be insulated. The leaves are secured together with wall ties.

CEMENT FILLET
The covering over a junction (eg between roof s and walls) made from mortar instead of a metal flashing.

CHIMNEY BREAST
That part of the chimney flue that projects into a room. The ‘stack’ is the part above roof level.

COMBINATION BOILER
Modern ‘sealed system’ gas boiler which activates on demand for hot water or central heating and does not require water tanks or cylinders, being supplied direct from the mains.

COPING
Masonry covering laid on top of a wall, to stop rain soaking into the wall, usually of stone or concrete.

CORBEL
Projection of brick, stone, timber or metal jutting out from a wall to support a load such as a beam.

COWL
A cap to a chimney or vent pipe.

DADO
Protective wooden or tiled horizontal strip running along internal walls, about 1m above the floor.

DORMER WINDOW
A window which projects out from a roof slope.

EAVES
The overhanging edge of a roof near the gutter.

FALL
The slope or gradient, typically of a pipe run or flat roof, to ensure water run off.

FANLIGHT
A small window above a door or casement.

FASCIA
Horizontal timber boards that run along the eaves at the base of roof slopes. They often cover the ends of the rafters. Gutters may be fixed to them.

FIBREBOARD
Lightweight board for ceilings or internal walls made of compressed wood pulp, now superseded by plasterboard.

FINIAL
A small ‘spire’ type ornament, often of terracotta or iron, fixed to the roof ridge at a gable end.

FLAUNCHING
Smooth contoured cement mortar around the base of chimney pots.

FLUE LINING
Flues are the ‘exhaust ducts’ for gasses from fires or appliances. Flue linings are long tubes fitted within flues, usually of stainless steel, clay pipework or concrete.

GABLE
The triangular upper part of a wall under the verges at the edge a pitched roof (‘gable end’).

GULLEY
An opening into a drain, receiving water from downpipes or waste pipes.

HEADER
The end of a brick, visible in solid walls when laid crossways (see ‘stretchers’).

HOPPER or HOPPERHEAD
An open-topped box or funnel at the top of a downpipe that collects rainwater or waste water from one or more pipes.

INSPECTION CHAMBER
A ‘manhole’ with a removable cover providing access to the drainage channel at its base.

JAMB
Vertical side part of a door frame or window.

LAP
The overlap of courses of slates or tiles.

LEDGED & BRACED DOOR
A ‘ledged door ‘ is made from vertical timber boards fixed to thick horizontal cross-timbers called ledges. Some are strengthened with diagonal braces.

LINTEL
Horizontal structural beam over a window or door opening. Normally made of timber, concrete, stone or steel.

LOUVRES
Glass or timber slats laid at an angle or hinged so that they can be opened to allow ventilation.

MANSARD ROOF
A roof constructed so each slope has two different pitches – a shallow upper part and a steeper lower part – so as to provide a top floor of usable space within a roof structure.

MASTIC
A generic term for any sealant used in the building process, eg for sealing joints around window openings.

MEZZANINE
An intermediary floor, eg between the ground and first floor.

MORTISE
A slot cut in a section of wood for a corresponding ‘tenon’ of another section to fit into.

MULLION
An upright division of a window such as a vertical bar dividing individual lights.

NEWEL
A stout post at the bottom or top of a stair to which the handrail is fixed.

NOGGIN or NOGGING
A short timber batten that fits between a pair of joists or timber studs to add strength.

NOSING
The rounded projecting edge of a stair step.

ORIEL WINDOW
A window projecting from an upper floor.

PADSTONE
A stone or robust block laid under the end of a beam or steel joist, to help distribute the load.

PARAPET
Low wall along the edge of a flat roof or balcony.

PARQUET FLOOR
Small strips of wood usually laid on a solid floor to form a pattern.

PIER
A vertical column, usually built in brickwork, used to strengthen a wall or support a weight.

PARTY WALL
The wall which separates, but is shared by adjoining properties.

PITCH
The angle or slope of a roof, technically the ratio of span to height.

PLINTH
The projecting base of a wall, usually of brick or render.

PURLINS
Horizontal beams in a roof upon which the rafters rest.

RAFTERS
The main sloping roof timbers to which the tiles/slates, battens and felt are fixed.

RAILS
The horizontal framing members of a door or window, usually at the top or bottom (see also
’stiles’).

REBATE
A recess, groove or rectangular step cut in the edge of a piece of timber or stone etc (rebated’ or set-back) to receive a mating piece.

RENDER or RENDERING
General term for the finish applied to external wall surfaces of sand and cement /lime (or the first coat to plastering internally). It may be smooth, or finished in rough cast , pebbledashed etc.

RETAINING WALL
Usually a garden wall built to hold back or retain a large bank of soil, rubble etc.

REVEALS
The vertical sides of an opening cut in a wall (typically of brick or stone) eg between a door or window frame and the front of the wall (see also ‘jambs’).

RIDGE
The top or ‘apex’ of the roof where two slopes meet, formed from a timber board joining the tops of the rafters and covered with shaped ‘ridge tiles’.

RISER
The vertical portion between treads of stairs

RISING DAMP
Moisture soaking up a wall from the ground, by capillary action, or through a floor ( see ‘Damp Proof Course’)

ROOF SPREAD
The outward thrust of a poorly restrained roof causing a wall to bow out. (see ‘collar’).

ROOM SEALED APPLIANCE
One that takes its combustion air from outside via a ‘balanced flue’ and also expels exhaust fumes via the same flue. Most modern boilers are room sealed.

SARKING FELT
A layer of bituminous felt used for covering roofs before laying battens as a secondary defence against rain, but was not normally fitted in pre-war houses.

SETTLEMENT
General disturbance in a structure showing as distortion in walls etc. Usually the result of initial compacting of the ground due to the loading of the building.

SOAKERS
Strips of metal (usually lead, zinc or copper) fitted beneath tiles to provide a water-proof joint at the junction of a roof with a wall or a chimney. Normally overlain with flashings.

SPALLING
Crumbling masonry as a result of weather damage

STILES
The vertical framing members of a door or window (see also ‘rail’).

STRETCHER
The side of a brick, visible in walls when laid lenghways (see ‘header’)

STRING COURSE
A course of brickwork that projects beyond the face of an external wall (or band course).

SUBSOIL
Soil lying immediately below the top soil, upon which foundations usually bear.

TILTING FILLET
A timber fillet fixed under the roof coverings above the eaves, in order to raise the edge of the first row of slates.

TONGUE & GROOVE BOARDING
Close fitted boards where the edge of one board fits into a groove of the adjoining board.

TORCHING
Mortar traditionally applied on the underside of slates or tiles to help prevent moisture penetrating.

TRANSOM
Horizontal bar of wood or stone across a window or top of door.

TREAD
The horizontal ‘flat’ part of a step or stair.

TRIMMER
A small section of timber joist run at right angles to the ends of the main floor joists to form an opening, eg for stairs or a fireplace.

TRV
Thermosatic radiator valve. An adjustable sensor valve next to a radiator allowing its temperature to be set.

UNDERPINNING
A method of strengthening weak foundations where a new stronger foundation is placed beneath the original.

VALLEY GUTTER
Gutter at the junction of two roof slopes – at the bottom of a ‘V’.

VERGE
The edge of a roof , especially over a gable.

WAINSCOT
Wood panelling or boarding on the lower part of an internal wall.

WALL PLATE
A timber beam placed on a wall, eg at eaves level for the roof rafters, or to receive floor joists.

WALL TIES
Strips of metal built across cavity walls to join the inner and outer skins.

WEATHERBOARD / WEATHER BAR
A board fixed to the bottom of a door on the outside to prevent rain driving underneath. A weather bar is a strip of metal fixed to a door sill to prevent water flowing under the door. 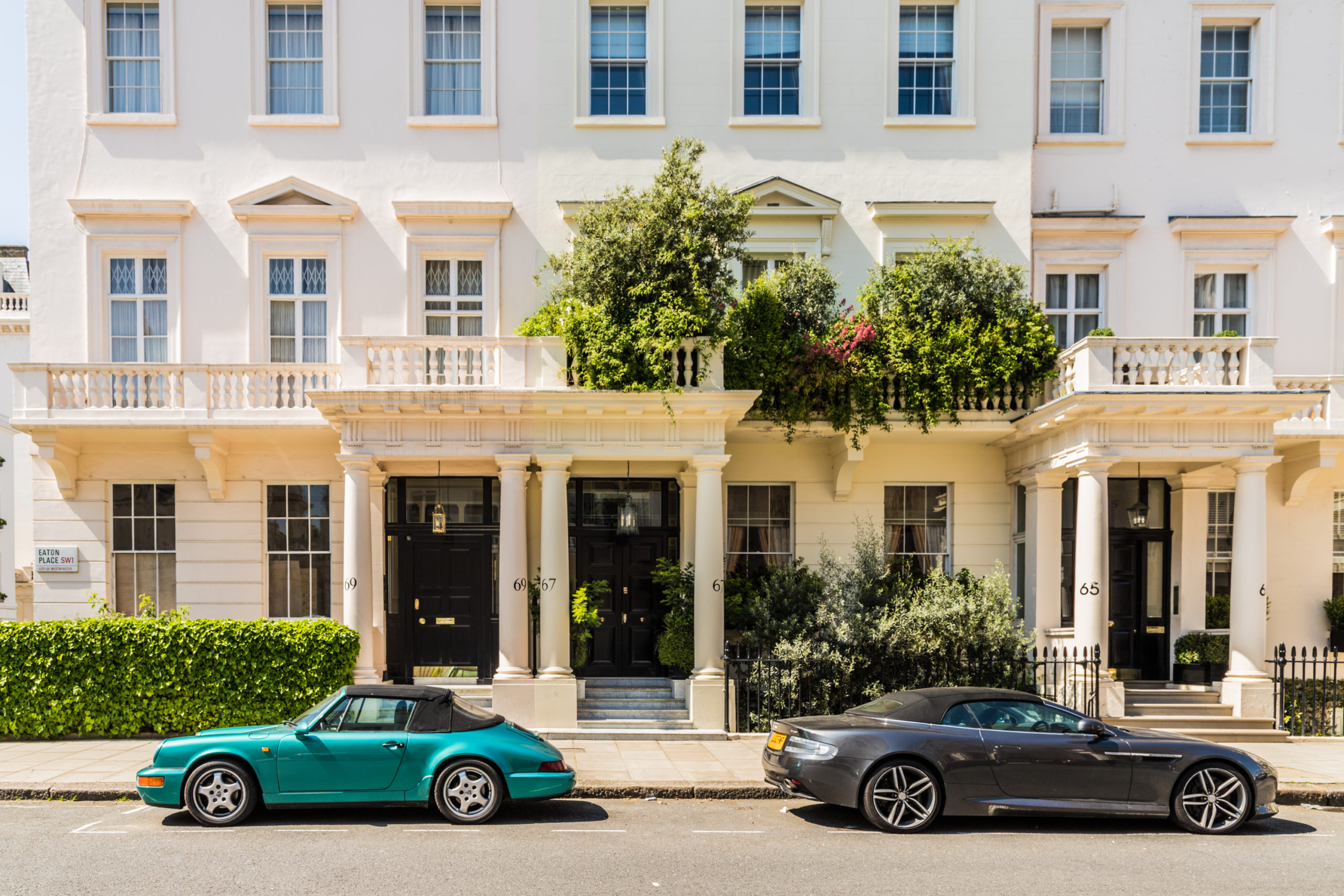 Want to speak to a Surveyor?